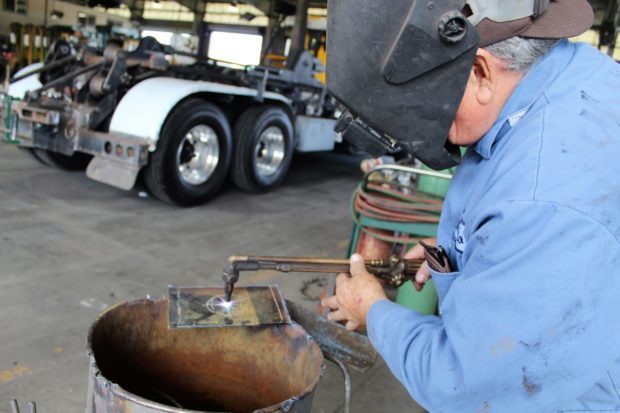 As a welder, Salvador Acero says that to be good at what he does, he always has to look at how to make things better. Visualizing potential solutions, figuring out a plan to accomplish it, and then executing his vision.

When he isn’t fixing up V.V.S. garbage trucks, his hobby is fixing up old tricycles!

Salvador shared a story with us of one particular child’s tricycle that he fixed up and sold at a garage sale. Unbeknownst to him, the woman he sold it to had bought it for her daughter who had Down syndrome.

This little girl loved her bike so much that she played with it all the time, everyday in fact. She played with it so much so that the bike actually began breaking down. It ended up as a hunk of metal not even resembling a bike anymore, and the little girl still continued to play with it.

The mother wanted to get the tricycle fixed for her daughter so she came back to the neighborhood looking for the house where the garage sale had been.

She couldn’t remember which house Salvador was at, so she went up and down the streets looking for him.

She did this for quite awhile until finally Salvador just happened to walk outside at the exact moment the lady was on his street. She reminded him of the little tricycle she bought from him and begged him to fix it, explaining how much her daughter loved it. Salvador told her to give him 6 months, and that he would do his best to salvage it.

When it was all done and the lady came back with her daughter to pick up the bike, it was absolutely beautiful.

When the little girl saw it for the first time, she was overcome with excitement. She had the biggest smile on her face and just kept looking at her brand new bike with amazement.

When the mother tried paying Salvador for the work he did, he politely told her that it wasn’t necessary. He said that just making her daughter happy was enough.

After sharing this wonderful story with us, Salvador Acero went on to share that the look of pure joy on that little girl’s face is an image that will forever be burned into his memory and is one of his proudest moments.